I decided to start Buddy’s Blankets, a 501(c)3 Nonprofit, in memory of my precious rescue dog named Buddy. He became very sick and spent over a week at Gulf Coast Veterinary Specialists in Houston, Texas in the Critical Care Unit, endured several surgeries and became septic. Every time I visited Buddy, often three times per day, I would bring him a clean, soft and fuzzy baby blanket so that he would feel comforted despite his surroundings. I would leave the old ones for the hospital staff to wash and reuse for the other sick animals. One day while lying in the hospital with him, I noticed that the other animals did not have soft and cozy covers, they only had towels to lay on or cover them up with. Sadly, Buddy lost his fight on Sunday morning, the 18th of September, 2016, surrounded by all his family. Buddy was wrapped in a freshly washed and warm and cozy blanket when he passed thanks to the caring and kind staff. The staff at Gulf Coast explained that the blankets dried so much faster than the towels they had been using, and unlike towels, were always soft no matter what.

The only way I knew to cope with our loss was to honor Buddy and make blankets with his little logo on them and donate them to Veterinary Teaching hospitals, Rescue Organizations and Animal Shelters all over the country in Buddy’s memory. He was my little shadow and I was just lost without him.

Both sick and rescued animals are scared when they are either in a hospital or newly brought into a rescue group or a shelter. Providing a soft blanket to a sick animal gives them comfort, and emotionally helps their bodies to heal better and assist in their emotional well-being. For rescue animals, who have often never had anything of their own – not a bed or a toy – giving them their own blanket gives them a sense of self, a safe and positive environment, and lets them know that someone cares about them.

Special thanks to David Textiles for their support. Buddy’s Blankets was recently featured by David Textiles, Inc. and we appreciate the support and donations. Click here to read more… 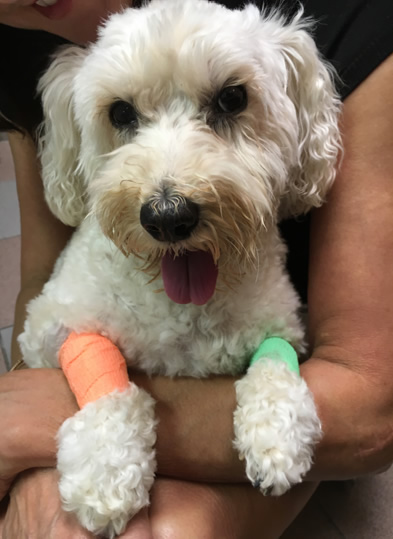